“A tasting on Friday last week proved that the combination of the historic grapes of south west France and the cool climate of the Pyrenean foothills offers the potential to craft truly fine white wine. 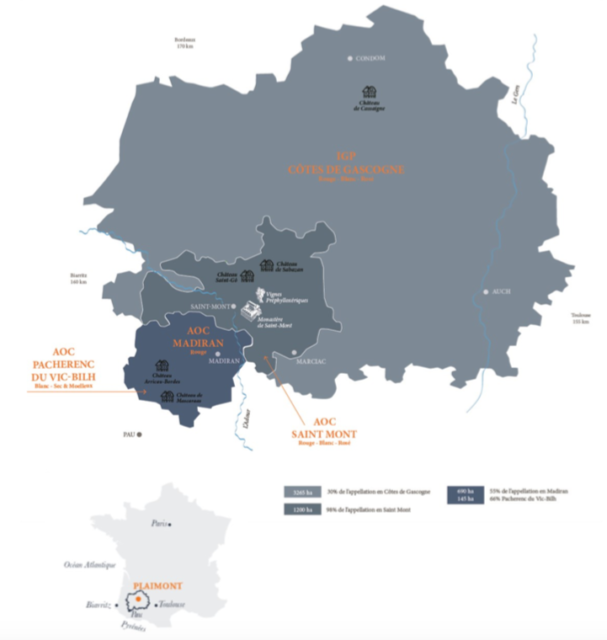 The location of Saint Mont AOP in France. Source: Plaimont

Conducted over Zoom by Olivier Bourdet-Pees, who is managing director and head winemaker at Plaimont Producteurs, the largest producer in Saint Mont, the tasting featured a selection of remarkable white wines from this south west French region, which is located in the foothills of the Pyrenees.

In particular, a wine called Grande Cuvée Cirque Nord, which is a barrel-fermented white made with native grapes of the area Gros Manseng, Petit Courbu and Petit Menseng, provided a snapshot of the quality on offer from white varieties in this part of France – an area better known for strong reds from Tannat.

Hailing from a north-facing vineyard at the top of hillside, the white wine, especially the warmer 2016 vintage expression, is a delicious richly-textured combination of pineapple, cream and toast, with a refreshing Riesling-like citric acidity.

But, because it is from a cool, north facing site, it was actually stripped of its AOP Saint Mont status for three years from 2010, because France’s INAO (Institut national de l’origine et de la qualité) declared that north-facing vineyards couldn’t carry the AOP classification – meaning that one of south west France’s best white wines had to be sold as a Vin de Pays.

It was only following a tasting with other white wines of the region in 2013 that this wine’s status was re-instated, ensuring it carries the AOP Saint Mont today.

Commenting on this wine and others from this part of France, Bourdet–Pees expressed his great belief in Saint Mont for top end whites.

Also, with plenty of rainfall in this part of France, he said that there were no problems with drought, making Saint Mont, when combined with its well-adapted historic grape varieties, along with its range of aspects and altitudes, a brilliant place to make wine should climate change led to higher temperatures and lower rainfall.”